The Amazing Disgrace: The Final Chapter 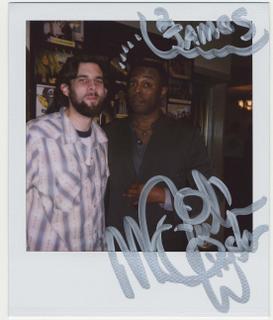 By the time I left the Bendix, the rain had picked up, and parking lots were starting to get a little flooded. So I deftly jumped around puddles, moving from parking lot to parking lot with deftness and grace. Sure, I stepped in a few fairly deep puddles here and there, but, overall, I did a pretty good job of ensuring that I didn't spend two hours at Bananas casually inviting the onset of pneumonia.

When I got to the club, I paid the cover (is it really that important how much it was?) and asked to be seated "anywhere but the front." So I got a seat at a table right by the door, next to a couple who laughed entirely too hard at the lame relationship jokes from the two warm-up comics. I am racking my brain trying to think of a sufficiently lame example of these jokes, but I honestly can't recall even one. They were just that bad. So bad that I'm sure one of the comics will have his own sitcom any day now.

Soon it was time for Michael Winslow to take the stage. Almost immediately, he began sweating profusely. In fact, during a really bad opening bit on what women do when they use a public restroom, I became so distracted by the sweat overtaking him that I realized I wasn't even really paying attention to what he was saying. But I gradually was able to focus on his act, which, generally speaking, got better as it went along. And it was comforting to hear someone else yell out, "No, not on cauliflower" when Michael Winslow went into his kung fu movie shtick. (If you don't get the reference, congratulations...you did productive things when you were a child.)

After another long bit about making prank phone calls as a kid in a voice that eventually came to be that of a Gremlin, he launched into a genuinely bizarre bit about a movie he wanted to make starring Flipper, Cheech, and Chong. It was mainly a means to introduce impressions of a dolphin and Cheech and Chong, but when he brought out the dolphin hand-puppet, I started to get nervous. Everybody else seemed to enjoy it, though, so maybe my comedic sense is off. I did enjoy his impressions of Cheech and Chong, which seemed to go over just about everybody's head, so maybe it just wasn't my kind of crowd. I shudder to think of what exactly "my kind of crowd" is.

There were also impressions of Tina Turner (so-so), Led Zeppelin (Robert Plant and Jimmy Page's guitar), and, of course, Jimi Hendrix (the big finale and, honestly, a still-impressive rendition of Jimi playing the "Star-Spangled Banner"). He also broke up the stage act by showing a scene from "Star Wars" and providing the sound effects. Jealous yet?

I feel comfortable in saying that the show surpassed Screech's in comedic value. I realize that there is no fainter praise with which one can be damned, but it's the best I can do. Seriously though, he does some cool things with sound effects, OK?

After the show came the inevitable autograph/Polaroid session in the lobby. (NOTE: At this point, anyone interested in dating me at any point in the future should probably stop reading.) I brought along my "Police Academy 4: Citizens on Patrol" poster (which I forgot I had until earlier that day), along with my DVD copies of that movie and "Police Academy 5: Assignment Miami Beach." I wasn't sure if I wanted all of those things signed, but I wanted to be prepared, just in case. I also wasn't sure about getting the Polaroid ($15), because, well, see that number in parentheses?

Anyway, I decided to get the poster signed and then worry about the DVDs if the line died down (I don't want to cause a scene...). The guy a couple of spots ahead of me in line really couldn't have been more excited. I guess his girlfriend (who was in the bathroom) was approached as part of that dolphin hand-puppet bit and "she just loved it, man." So that guy bought two DVDs to get signed (I was definitely not spending $20 on the DVD, a recording of his act, which, you might remember, I had just seen) and asked if he could take a picture with his cell phone camera. Michael Winslow seemed to hedge a bit, but then quickly agreed, even if it meant losing the Polaroid money. I want to point out here that, for whatever it's worth, both Michael Winslow and his manager (who I think was also his wife) seemed like genuinely nice people. They actually appeared to be appreciative that people came out on such a night. If they only knew...

Soon it was my turn and I pulled out the poster, which not only brought much appreciation from Michael Winslow, but also a "Wow, who brought the poster?" from the guy who was now trying to find his girlfriend so she could get in a picture. Then the manager/wife asked me where I got it (Ebay). A scene was almost caused, but it was quickly avoided. And my poster was boldly signed (I imagine it will be on display soon).

Then, staring at the torrential downpour that had developed while the show was going on, I decided, what the hell, I'll get the DVDs signed and buy a Polaroid, too. If you ever ask me for $15 and I say I can't give it to you, feel free to remind me of this moment. It was a moment of weakness, tempered by my fondness for any entertainer who's ever brought me joy and a desire to pay each and every one back in some way.

So I get on the end of the line (which never really got lengthier than about 20 people), and when I return to the table, Michael Winslow says, "Oh, cool, you went back and got the DVDs." Then I handed a $20 bill to his manager/wife for the Polaroid and explained that I didn't want to hold up the line, so I waited to get the DVDs signed. At that, his manager/wife said, "Oh, go ahead, just get in the picture." Which is how I got the free Polaroid you see above.

After the euphoric high that comes with scoring a free signed Polaroid from a member of the "Police Academy" cast, I headed out into the downpour and soon discovered that the hotel parking lot was now filled with several inches of water. There was no longer a way to walk around it, so I just had to give in and sacrifice my sneakers to the cause (what "the cause" was is kinda hard to say).

Then, in the next parking lot, there's a little room for jumping, so I hop around, with my umbrella bravely fighting an unwinnable battle and mostly obscuring my vision. I avoid one giant puddle and then another, and I think I'm pretty much safely out of the parking lot with one more well-placed jump.

And that's when I leap face-first into a giant sign.

Tinsel and Rot Hall of Fame